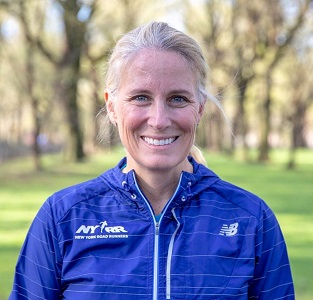 Christine Burke became NYRR’s Senior Vice President of Strategic Partnerships and Runner Products in July 2019; her previous role was Vice President of Runner Products and Services. In her role, Christine is responsible for training, membership, runner services, the NYRR RUNCENTER featuring the NB Run Hub, international tour operators, charity partners, race registration, and digital and virtual runner products. She joined NYRR in January 2015 as the Director of Runner Products and Services. Burke has an extensive professional background in retail and luxury marketing, specializing in retail marketing, digital marketing, and e-commerce. Previously she worked for two years as the Vice President and General Retail Manager at Hastens Beds, and for nine years with L’Occitane en Provence, most recently as the Vice President of Global Digital Marketing and E-commerce. She graduated from Williams College with a BA in political science and has an MBA from Fordham University. A lifelong athlete, Burke played softball and ran cross country in college. She ran her first marathon at the 1993 New York City Marathon, which she finished with both her parents, who inspired her to run from an early age. She has completed 25 marathons, one Ironman triathlon, and dozens of NYRR races since the early 1990s. Burke lives in Manhattan with her husband and three children—twin boys and daughter—all of whom are quickly approaching the day when they will run faster than their mother.

All presentations by Christine Burke