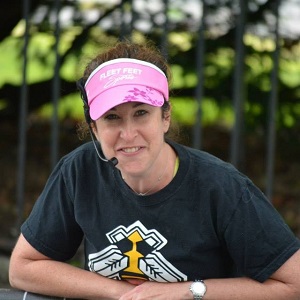 Ellen, born and raised in Huntington Station, Long Island, relocated to Rochester after graduating from SUNY Plattsburgh in 1993 with a degree in Math. Ellen also began running at an early age of 10 because her mom wouldn’t allow her to play any other sport.  Apparently Mom knew Ellen’s future path. As a teenager Ellen was not allowed to own a car so she began cycling, using her bike as her primary means of transportation. When Ellen completed her MBA at Rochester Institute of Technology in 1999, she was able to kick her enthusiasm for multisport–triathlon and duathlon into gear.  Ellen's professional background started in the IT arena as a Project Manager for EDS and then moved into Product Management with Terry Precision Cycling. Ellen always had a passion for working in athletics and decided to enter into Fitness Instruction as well with Personal Training and Coaching.  Ellen met her husband, Boots, in 2001 and married in February 2003. Together they own YellowJacket Racing, a Rochester-based Race Management company that owns and directs 50 plus running and duathlon events throughout Rochester and Buffalo. They also provide services for another 20ish events in Western New York. Boots and Ellen opened their first Fleet Feet Rochester location in Brighton, NY in 2004. Over the following 15 years, they opened a second Fleet Feet location in Greece, NY in Fall 2011. In 2014, the original location was moved to a 9000 sq ft space within the City of Rochester and later that year they acquired Fleet Feet Buffalo. In 2019, their fourth Fleet Feet location will open in Victor, NY.

All presentations by Ellen Brenner